For the past year or two, at least twice a week Norm and I would spend a half an hour talking via Zoom or Facetime. Norm was the Japanese Sensei living in Japan, I was the wiling American student, living in the United States, sitting at the feet of the Master.

Sensei means, “one who has gone before us.” While Americans recognize the meaning of the word Sensei as “teacher,” we forget that, “to go before us” requires, “experience, wisdom, and insight.” Becoming a teacher doesn’t mean that these unique traits will follow.

For Norm, insight, wisdom, and experience brought he and Noriko back to Japan some 90 times. It was Japanese and their wonderful culture that gave Norm meaning and purpose throughout his eight-eight years of living a miraculous life. The Japanese culture was where Norman thrived; it’s where he did his best work learning then becoming a Sensei to us.

Japan is where our Sensei learned, then rapidly taught us all about the meaning of life and what it meant to live a life filled with purpose, hope, and clarity.

Years ago, I wrote a story for a national publication about Japanese culture and the wonderful men and women who make Toyota such a wonderful place to work. I saw the name Norman Bodek as someone who had commented on the story. Why was this famed member of Japanese society commenting on my little story about Toyota? And who cares about this silly, local writer, and consultant whom no one had even heard of?

But I had heard of Norm. And that was what mattered me. I had every one of Norm’s books staring at me from my library shelf, yet while I knew of him, I did not know him at the time.

The grass wouldn’t get any greener––and I decided it was time to reach out to personally thank the man who made such a difference in my life. Even if he didn’t know who I was.

Norm took my call, and this began our amazing friendship. A mutual affection that would enable me to speak publicly to audiences around the world through Norm’s relationships and confidence in my message.

Two years ago, after a very difficult consulting assignment on America’s East Coast, I returned to my office to an envelope personally addressed to me from Norm. It was Norman’s handwriting, so I knew it mattered to Norm––and therefore, mattered to me.

Inside the envelope were three Japanese business cards. They were given to Norm by Dr. Juran, Dr. Deming, and Dr. Ishikawa. They were Norm’s gift to me so that I would never forget his legacy and his important work. Next to my relationship with Sensei Norman, this is the single greatest gift I’ve ever received.

Norman and I recently began ending our calls with the words, “I love you.” I encourage you to do the same for others, long before you have no more chances to let them know the difference they made in your life.

We love you Norman. 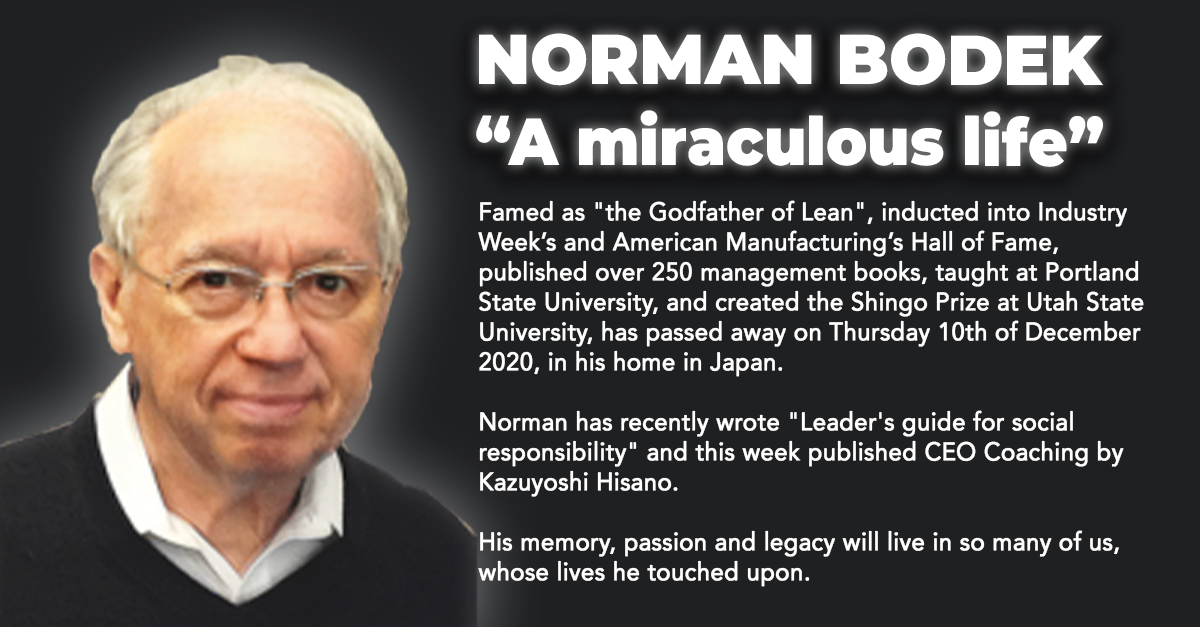