It was in the mid 1990s when I first met Norman. I was working as a Senior General Manager in an organization in Chennai, India. I was totally oblivious of the great revolution happening in the world driven by the methodologies developed in Japan. Norman loved India and would come here whenever he could. Without his spirit of selfless giving, I am sure the productivity of manufacturing companies in India would have been far lower today.

Suresh is the managing director of TAO Consulting Systems based in Chennai, India. He is a collaborator of the institute and a long term friend of Norman. He worked closely with Norman in his latest publication “CEO Coaching” book.

Norman’s contribution spans the entire gamut – starting from creating awareness to facilitating the practice of, the principles and techniques that were instrumental in the great strides Japan had made in manufacturing – from a producer of junk to the benchmark for quality, productivity & efficiency. He took Venu Srinivasan, a leader of the TVS Group and a doyen of Indian Industry on a study tour of Japan, instilling in him the passion to emulate the transformation in India.

Norman published the most powerful books in the world on organizational improvement and transformation. These books were worth their weight in gold, one could just read them, go to the shop floor and help to create a significant improvement. They were also extremely expensive by Indian standards. Hirano’s “JIT Implementation Manual” for example sold for over $ 1,000 and was worth ten times that.  To make these books more easily accessible in India, he collaborated with Srinivasamurthy of K. Krishnamurthy Books to have them published and sold in India at a fraction of the cost, at which they were available in USA. Productivity Press India, went on to publish a number of books that had a significant impact on productivity & quality in Indian companies, which has perhaps never been acknowledged.

Not satisfied with this, Norman & Srinivasamurthy organized a series of workshops bringing in consultants from Productivity Inc. USA to run workshops on topics like Achieving Quick Changeover (Shingo’s brilliant Single Minute Exchange of Dies) & CEDAC (Dr. Ryuji Fukuda’s improvement system that later was renamed SEDAC or Structure for Enhancing Daily Activities through Creativity). This too did not satisfy Norman, he knew much more needed to be done and he decided to put together a small group of consultants. The company was called Productivity Consulting Systems. He allowed us to use the name and logo of Productivity Inc. He also gave us almost <image003.jpg>the entire set of books that he had published. We did pay a royalty, but if I remember right, all of it was spent in India. I was fortunate to be one of the founders of this company, and the only one who had no idea about any of these techniques, or of consulting. The encouragement he gave us and the confidence he instilled in us was something that was absolutely natural for him. He was especially fond of me and went out of his way to teach me and give me opportunities to learn. He knew that I was particularly interested in Dr. Fukuda’s system (A holistic mix of Policy Deployment – The P/O Matrix, Production System – Stockless Production & Improvement Process – SEDAC) and invited me to USA to get trained directly by Dr. Fukuda along with Productivity Inc. consultants in Portland. That was a time when I could never have afforded it, if not for Norman’s generosity. I only had to pay for my flight tickets. Not only did he let me attend the week long training conducted by Dr. Fukuda, but also gave me the opportunity to participate in a Visual Workplace event at Cummins Engine Plant in Columbus Indiana and a Maintenance Miracle workshop near Portland. Each of these workshops was a full five day event. A few years ago, when I was in USA to attend my daughter’s graduation, he invited me to his home in Vancouver, Washington. I spent a few days there, enjoying the warm hospitality of Noriko and Norman. He spent the day teaching me the Harada method, and in the evenings we would discuss my experiences in consulting and he would share some of his fascinating stories about the Japanese masters. Both Noriko and Norman were most encouraging and supportive of the approach I was taking, combining personal development and inner growth with workplace improvement. 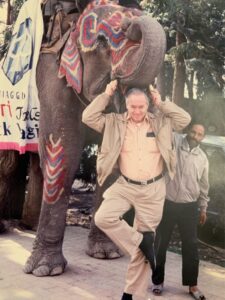 Norman got in touch with me a few months ago. As with many others, our consulting had come to a total standstill this year. He was full of excitement, and it was infectious. We met regularly on zoom and he started teaching me again. His latest discovery was Kazuyoshi Hisano and he was going to publish his book “CEO Coaching in English. As I felt the translation needed improvement, I started helping with that and was quickly drawn into the group he was bringing together to launch webinars and share the wealth of material he had unearthed and made accessible to the world. I am sure the NK Institute of Human Advancement, that he recently set up, will continue to contribute to the mission that he so passionately worked for till his very last day.

One of the most practical bits of advice I have heard is “Love everyone, Trust but a few”. Norman followed the first injunction, but not the second. He was taken for a ride by unscrupulous people, more than once, but when he spoke about it, I could not detect even a trace of anger or bitterness. Such was his simplicity, humility and spirit of service that few realize the value of the gifts he has given us and how much we owe this wonderful person.

He was 88 years old, lived a full life, was active till his last day and had a peaceful end. Definitely sad, and like deaths of all people we love, unexpected too. Such was his simplicity, humility and spirit of service that few realize the value of the gifts he has given us and how much we owe this wonderful person.